Make a Gif of a Website’s Evolution

For the latest StackExchange “time”-themed contest, I made a gif showing the evolution of StackOverflow from 2008 to today:

The first step was to find a decent API for the Internet Archive. It supports Memento, an HTTP-based protocol defined in the RFC 7089 in

Note this gives us the closest snapshot, so it might not be exactly two weeks ago.

We can use this code to loop using an increasing time delta in order to get snapshots at different times. But we don’t only want to get the URLs. We wants to make a screenshot of each one.

The easiest way to programmatically take a screenshot of a webpage is probably to use Selenium. I used Chrome as a driver; you can either download it from the ChromeDriver website or run the following command if you’re on a Mac with Homebrew:

We also need to install Selenium for Python:

The code is pretty short:

If you run the code above, you should see a Chrome window open, go at the URL by itself, then close once the page is fully charged. You now have a screenshot of this page in stackoverflow_20181119211854.png! However, you’ll quickly notice the screenshot includes the Wayback Machine’s header over the top of the website:

This is handy when browsing through snapshots by hand, but not so much when we access them from Python.

Fortunately, we can get a header-less URL by changing it a bit: we can append id_ to the end of the date in order to get the page exactly as it was when the bot crawled it. However, this means it links to CSS and JS files that may not exist anymore. We can get a URL to an archived page that has been slightly modified to replace links with their archived version using im_ instead.

Re-running the code using the modified URL gives us the correct screenshot:

Joining the two bits of code we can make screenshots of a URL at different intervals. You may want to check the images once it’s done to remove inconsistencies. For example, the archived snapshots of Google’s homepage aren’t all in the same language.

Once we have all images, we can generate a gif using Imagemagick:

I used the following parameters:

You may want to play with the -delay parameter depending on how many images you have as well as how often the website changes.

I also made a version with Google (~10MB) at 5 frames per second, with -delay 20. I used the same delay as the StackOverflow gif: at least 5 weeks between each screenshot. You can see which year the screenshot is from by looking at the bottom of each image. 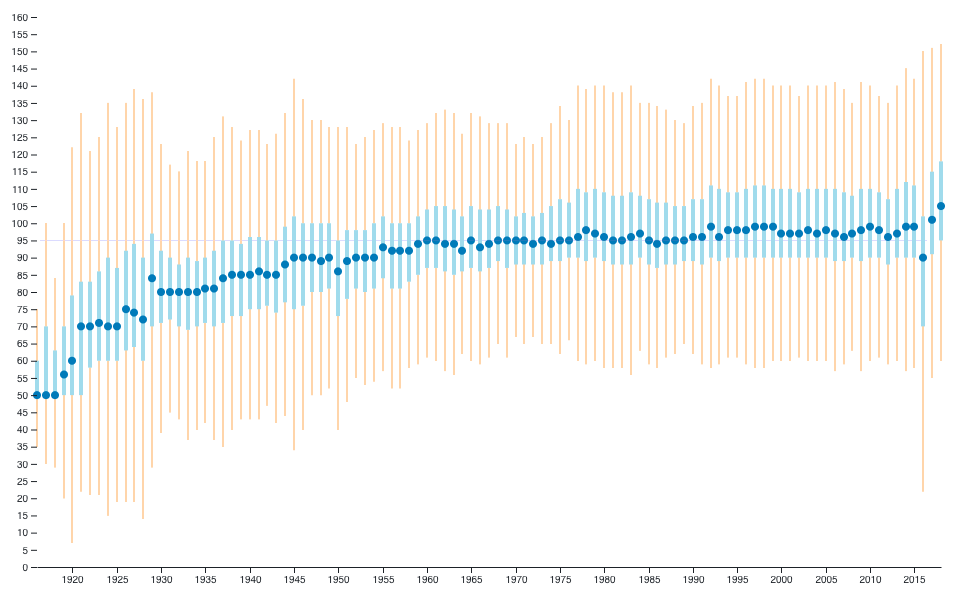 A Quick Link Previewer for Mattermost

Mattermost is a Slack-like self-hosted and open-source alternative. We use it at work but for some reason link previews don’t work. Before diving into Mattermost’s internals I wanted to see if I could write a quick workaround using the fact that Mattermost does show an image if you post a link ending with .png or .jpg.

When you post an image link, Mattermost makes a request to show it in the application. It detects those images using a regexp; not by e.g. sending a HEAD request to get the content type. If you have an image URL that doesn’t end with common extentions Mattermost won’t show it.

Mattermost doesn’t serve you a preview of the image; it rather gives you an img with the original URL. That means every single person reading the channel will request the image from its original location. Slack, on the other hand, fetch images, cache them, and serves them from its own domain, https://slack-imgs.com. Slack uses a custom user-agent for its request so you know where it comes from.

Mattermost, on the other hand, can’t use a custom user-agent because the request is done by your browser. The only thing distinguishing Mattermost’s request for a preview and any other request is it asks for an image:

The header above is Chrome telling the Web server it can deal with WebP images, then images in any format, then anything; in that order. Note it explicitly says it accepts WebP images because some browsers don’t support the format.

Unfortunately not all browsers are explicit. Firefox sends Accept: */* since Firefox 47 and so did IE8 and earlier versions. In those cases we can’t really do anything beside complicated rules based on the user-agent and other headers.

If we know how to tell if a request comes from Mattermost asking for an image preview rather than a “normal” user we can serve different contents to them: a link preview as an image to Mattermost, and the normal content to the user.

All we have to do is to make some sort of intelligent proxy. Using Flask we can make something like this:

This is a small web application that takes any route in the form of /<url>/p.png and either redirects you to that URL if your Accept header doesn’t start with image/; either serves you a Hello, I'm an image page.

All we have to do now is to return an actual image in lieu of that placeholder text. I used Requests and Beautiful Soup to fetch and parse webpages, and Pillow to generate images.

When one requests http://example.com/http://...some...url.../p.png, the app fetches that URL; parses it to extract its title and some excerpt; write that on a blank image; and serves it.

Extracting the title is as easy as grabbing that title HTML tag. If available, I also try the og:title and twitter:title meta tags. If none of those are available, I fallback on the first h1 or h2 tag.

Getting an usable excerpt is not too hard; here again I search for common meta tags: description, og:description, twitter:description. If I can’t get any of them I take the first p that looks long enough.

You can check that code on GitHub.

The Pillow library makes it easy to write text on an image. I replaced the (ugly) default font with Alegreya. The tricky part is mostly to fit the text on the image. I used a combination of Draw#textsize to get the dimensions of some text as if it were written on the image and Python’s textwrap module to cut the title and excerpt so that they wouldn’t cross the right side of the image.

I used fixed dimensions for all images (400×70) and kept a small padding along their sides. Previews with small or missing excerpts get some unused white space at the bottom; this could be fixed by pre-computing the final size of the image before creating it.

On most websites the preview works fine. We could tweak the text size as well as add a favicon or an extracted image.

In the end it took a couple hours to have a working prototype. Most of that time was spent dealing with encoding issues and trying various webpages to find edge cases.

The result is acceptable; it has the issue of not being accessible at all but that’s still better than nothing.

The source code is on GitHub.